Posted at 10:00h in Diamond Museum Amsterdam by admin 0 Comments
1 Like

In this blog we’ll be admiring the jewellery that is typical for British monarchs, we’re talking about the crown jewels of course.

The term ‘Crown jewels’ refers to more than just plain jewelry. There are many crowns, but the Crown Jewels where used during coronations. Such as jeweled swords, orbs, scepters and the Koh-I-Noor diamond where given as prizes.

St Edward’s Crown: the senior and most famous crown of the British royalty

When discussing the crowns of the Crown Jewels of the United Kingdom there is one that takes precedence over all others: St Edward’s Crown. This historical piece is the official coronation crown and was used in the coronation of Queen Elizabeth II, King Charles II, George V and several other British monarchs. Due to its weight a majority of former monarchs have actually chosen not to be crowned with this piece of history, but it was often kept as part of the ceremony. 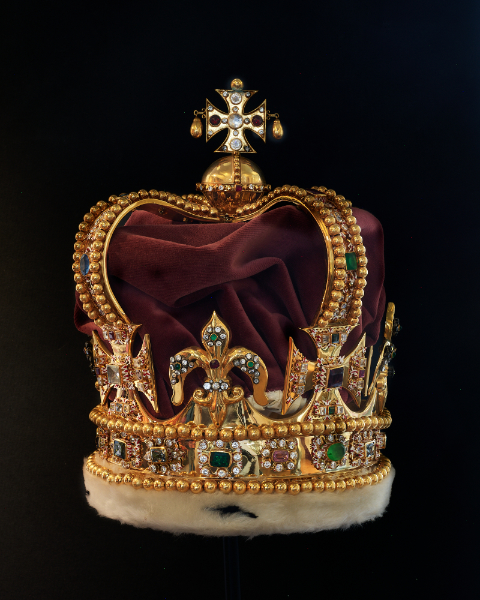 The history of St Edward’s Crown

The history of St Edward’s Crown is quite fascinating. It was worn at Christmas in 1065 by the famous St Edward the Confessorto whom this crown owes its name. Rumor has it that the origins of this crown go even further back in British history as some say St Edward’s Crown incorporates parts of the crown of Alfred the Great who reigned in the ninth century.

Apart from its use as the coronation crown, a two-dimensional form is also used as a symbol on many; a coat of arms, military emblems, police badges and various logos indicating a relation to the British royalty.

The characteristics of St Edward’s Crown

The crown has gone through many transformations during its history. It has even been destroyed during the English Civil War and then recreated in 1661 for the coronation of King Charles II. Another interesting fact about the crown is the precious stones that are embedded within the crown.

St Edward’s Crown can hold 444 precious stones, from 1911 the jewels were set permanently into the crown. Completing the crown for future generations. However, before 1911 the diamonds, emeralds and stones where only part of the crown on special occasions.

The scepters of the crown jewels

Another important part of the coronation of a British monarch are two scepters: the Scepter of the Dove and the Scepter with the Cross. 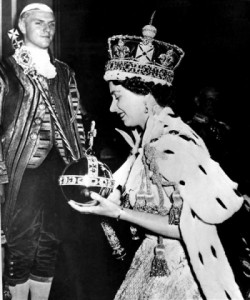 The former is a golden rod with bands of gemstones on it and an orb embedded on top. The Scepter of the Dove represent the spiritual authority of the British monarch.

The Scepter with the Cross is special for containing the Great Star of Africa, world’s largest clear cut diamond which weighs 530 carats. This diamond incorporate the biggest part of the Cullinan I, the largest gem-quality rough diamond ever found (3106.75 carats).

When both the Scepter with the Cross and the Scepter of the Dove are held by a British monarch, the St Edward’s crown will be placed upon their head and he or she will be crowned King or Queen of England.